How to make a tank float

You can make tools and weapons like swords, shovel hoe axes and pickaxes.

With those tools, you can start exploring your world and some caves too.

You can mine ossifiante with a diamond pickaxe and make a nether portal with only 12 obsidian. Light it up with some flint and steel after you do that you go to another dimension called the “ Nether”

and after that you can kill some endermen looking very tall monsters. Hope for the best to get an ender pearl.

To use an ender pearl you can get some blazes, getn blaze rods, make some blaze powder and craft an eye of ender. Get as much as you can then throw them and it will lead you to the stronghold.

Use 12 eyes of ender to put on the frames. After you lit up a new portal which will lead you to the end. Get some armour and kill the ender dragon! after that you can go back to the overworld and if you seen another portal throw an ender pearl and you can find an end if there is a ship go inside it then you get an elytra.using a elytra requires some fireworks and to jump from high places to fly.  and then if you want more xp you can make mob farm and get more loot too. 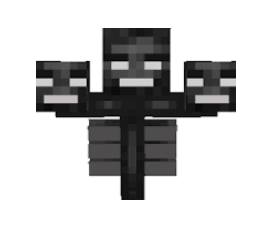 But that’s not the only boss battle there are three more ,elder guardian,wither and the woodland mansion.

To get soul sand  in the nether, they find black skeletons called. The wither skeleton hopes for the best and gets three wither skulls you might want looting on your sword.

Then put three blocks up of salsa de then put one on each side and bophut three of the wither skull and boom!! There now you have to beat the wither after you kill the wither then  you can craft a beacon.

To light a beacon includes any type of ore except lapis.

Need to make enough blocks to make a pyramid then put the beacon in the middle. Then it lights up. When it lights up then you become stronger in the game. Oh and also there is this ore called netherite.

You’ll need about five netherite scraps then put gold everywhere else except the middle. Then you have a nethérité ingot the put only beside

Diamond armour then you got a piece of the armour like a netherite helmet.

Find a village and trade some emeralds and then it can trade you a map to the woodland mansion and it should say that.

Then it will lead you to the woodland mansion, kill all the pillagers and the mobs one  of the mobs drops a totem of undying called an evoker and when you die it brings you back to life it is really good if you’re fighting like mobs or boss battles.

Elder guardian battle: When they spawn in the monument penthouse and in each- wing

Just to tell where those places I said are where the three elder guardians spawn.

Jungle temples are in the most rare biome which you probably know the jungle.

There are traps and you’ll see a chest.

Pillagers base:so pillagers are strong they have enchanted crossbows and a trapped golem. Open the golem then the golem will help you kill the pillagers then there will be a chest in the building.

Rades:do raids usually happen in a village some golems will help you kill the raid.

After you will get a totem undying.

There is this type of house  that is a black smith house. In the houses there are a chance of obsidian swords and diamonds or iron armour.

Minshafts: mineshafts is like a mine there will be some chests in minecarts you could find some diamond (beware there might be mobs) mine shafts are usually found underground there is a this type of biome that looks like the grand canyon and you might find mine shafts on the ground.

Ruine portals: ruin portals can be found underwater or on ground. In the chests there might be gold armor or gold apples and maybe obsidian.

Enchanting tables are used to upgrade items and armour.